I'm not sure where to even start. I had to wait a couple days before writing my thoughts down or it would have been a whole lot of "That was the worst thing I've ever done." "Running sucks" "I suck"...

I'm feeling a little better about it now, but I still don't really feel like rehashing it.  Bottom line, it was a rough day for me.

Here's how the weekend went-

The day before:
After a long drive to Portland, we checked into the hotel and headed to the expo.  I was able to get my bib and a shirt but that's about it.  Pnut and Little Dude were INSANE.  I said hello to Lindsay and Julie then went back to the hotel.  Note to self-NEVER take the kids to the expo.

I met Lindsay and her family for dinner.  I had chicken and rice, and a glass of wine.  It was nice to hang out and relax a little.

We went back to the hotel and I was asleep by 8:00.  I think I got the best sleep I've ever had the night before a race.

Race day:
Since I fell asleep at 8:00, I was up pretty early.  Unfortunately the kids were also up early.  I was trying to get ready while trying to get the hotel wifi to work on the ipad so Little Dude could play a game, and trying to get Pnut some breakfast.  None of this was easy at 4:30am, but I got dressed, and the kids were happy.  I headed out to meet Lindsay, Kerry, Julie and Megan.

Once I found everyone we headed to our corrals.  Julie and I were in the same one, which was nice.  We hung out, hit the porta-potty, and took a bunch of pictures. 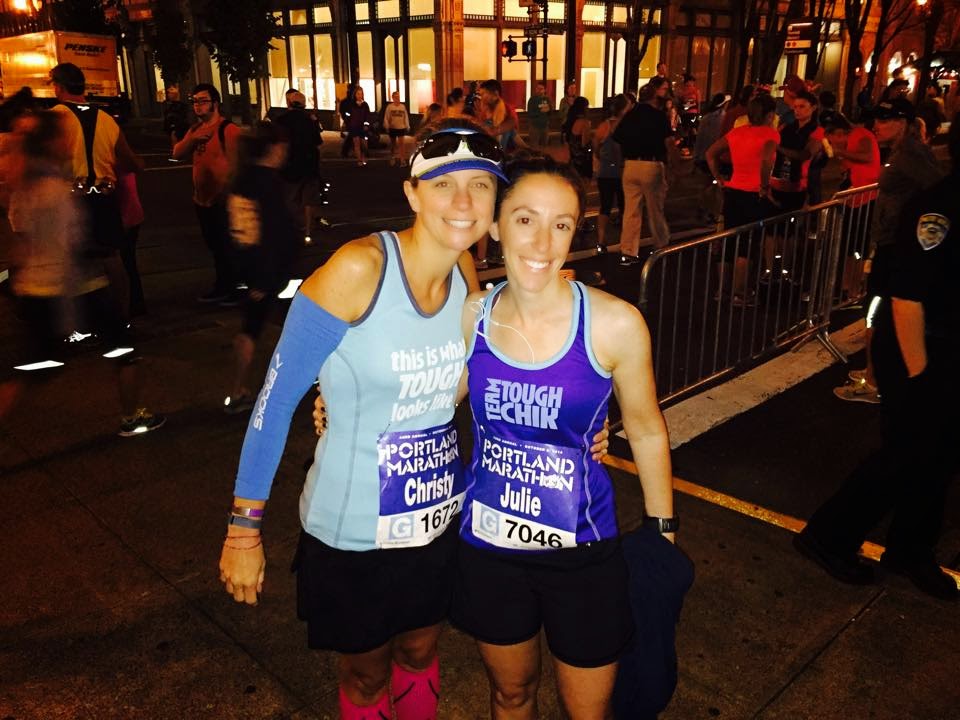 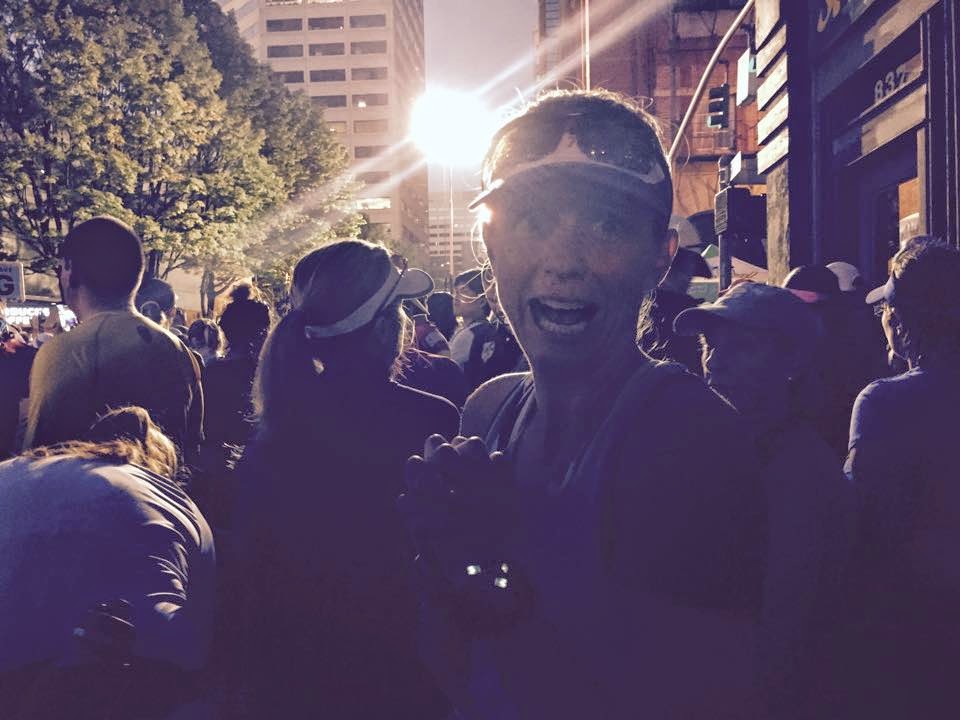 I felt totally ready. I was excited and confident.  Brian sent me a text letting me know where he and the kids were.  It was awesome to see them!!


Julie and I ran together for awhile. 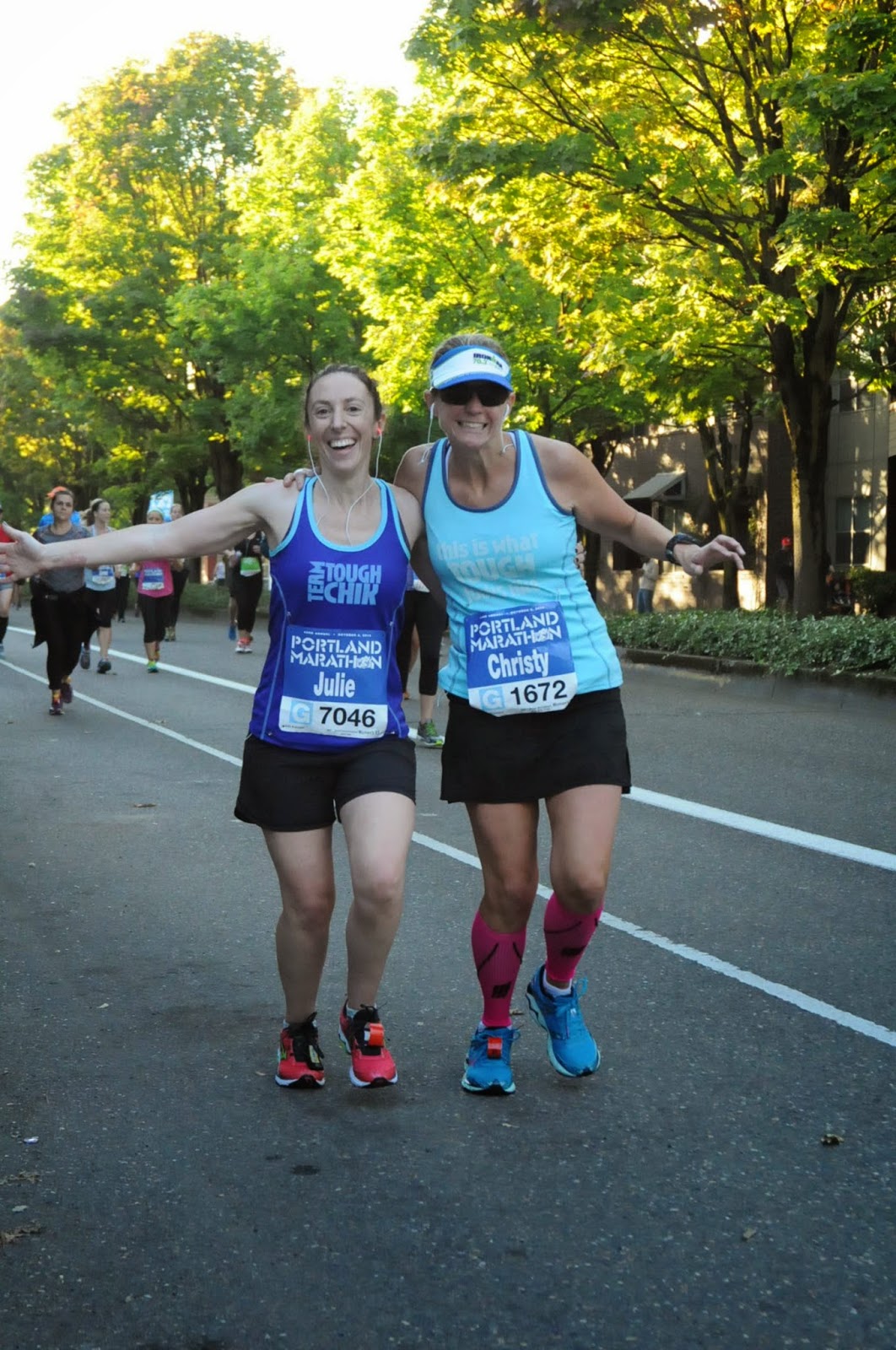 I was feeling good and ran ahead for a bit, then she would catch up, then I'd run ahead....This happened a few times.  Around mile 7 (I think) I had this horrible idea to try and catch the 5:00 pace group.  This was also the time that it was getting really hot and sunny, and there was no shade.  Did I mention I didn't run with a water bottle?  I didn't, and I was thirsty.  I'm sure the aid stations were not that far apart, but at mile 9, I thought they were 10 miles apart.  Around this time Julie caught up with me.  We chatted for a couple minutes and that was the last time I saw her.  (ps-she did awesome!!)

I finally got to the next aid station and thought I could get myself together.  I was only 9-10 miles in. I knew there was time for me to pull myself together and still have a good race. I stopped, tried to pee, got some water, electrolytes, and pretzels.  I took my time and thought that I was ok.  I ran around the corner and saw Brian and the kids again.  I got some hugs, and picked up a rock for Little Dude that was on the course. I felt like that was the boost I needed.

I was wrong.  About 1/4 mile from there I fell apart again.  I was so thirsty.  Around mile 13 I sent Erika a text that I was fading.  You know things aren't going as planned when you're sending texts during a race.  From here on, things were just painful.  I started getting stomach and leg cramps.  My mouth was so dry I couldn't swallow.  I had a headache.  I ran occasionally but I mostly walked.

That picture was around mile 20.  I was done.  Right before this picture was taken, I was going to call Brian and tell him I quit.  The only reason I didn't was because I was too emotional to even talk.  I worried he would answer and I would just start crying.

At mile 24 I started to wonder if I was going to die.  I seriously thought I might die.  I was dizzy and so crampy.  But 2 miles from the finish....what are you going to do?  Who quits that close to the finish?  So I kept going.  I forced myself to run the last 1/2 mile.  I saw Megan and her family.  It was awesome.  I knew the finish was so close.  Then I saw Brian and the kids.  Lindsay and Kerry were with them.  I remember seeing Lindsay but I was so out of it, I didn't see Kerry.  I remember giving Brian a hug and just crying.  Someone said "Go!  You have to keep running."  So I took off to the finish line. 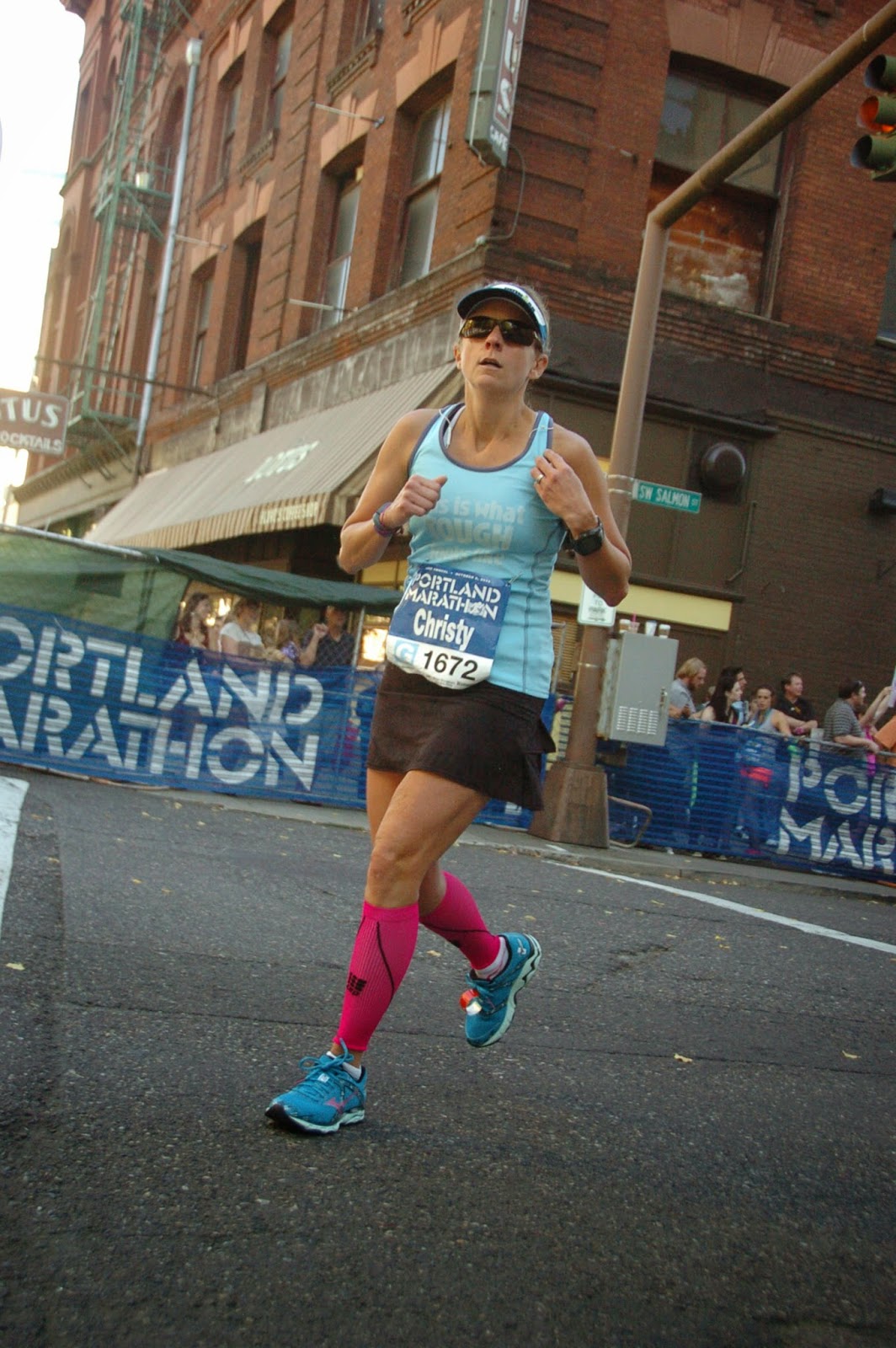 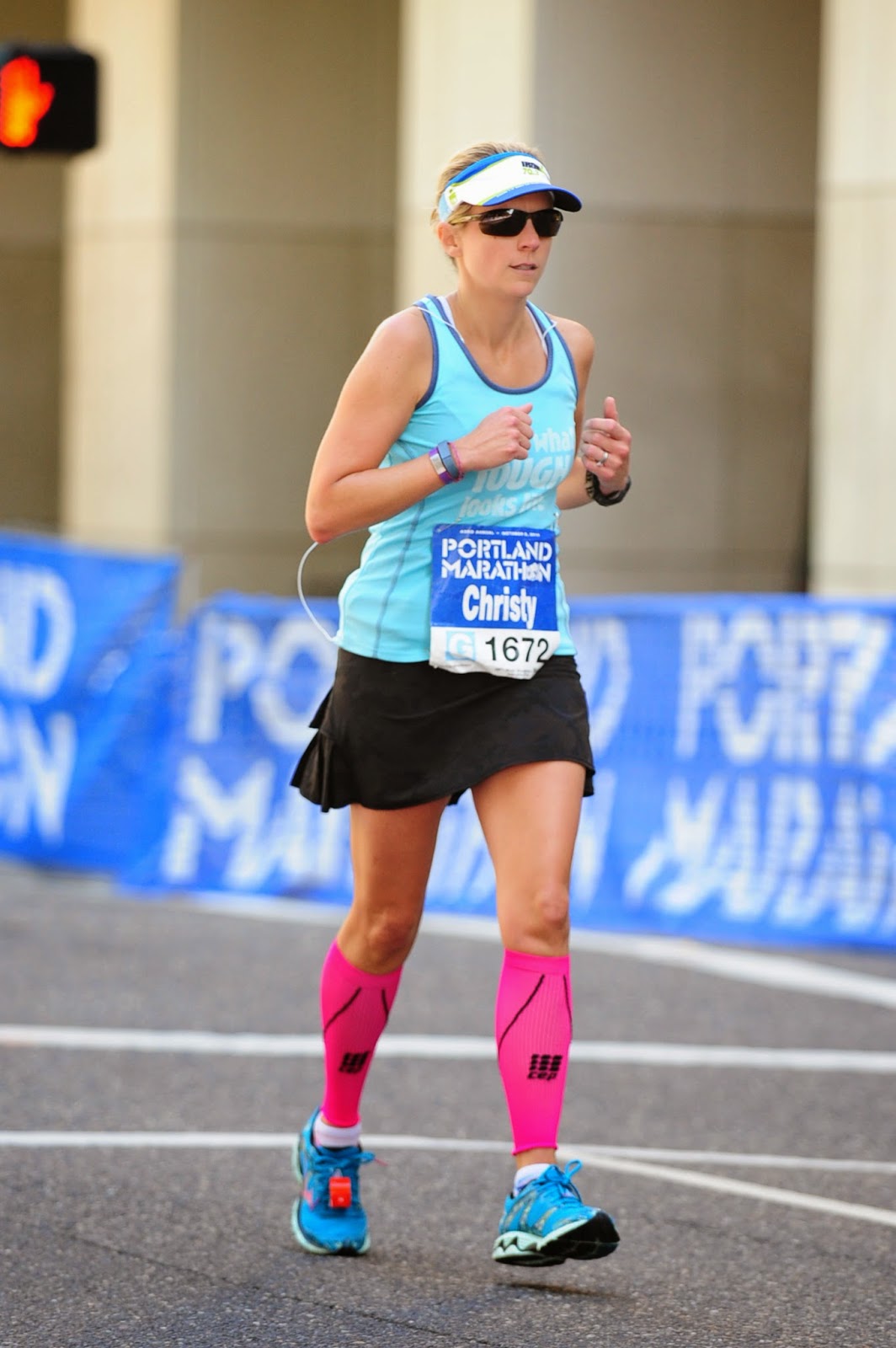 Crossing the finish line was a little anti-climactic.  I felt like my finish like was seeing my family.  I knew then I had made it.  I got my medal and ate some Cheetos.  I can't remember the last time I had Cheetos, but they were good.  I don't have a picture with the medal because I couldn't put it on.  I didn't want anything touching me. 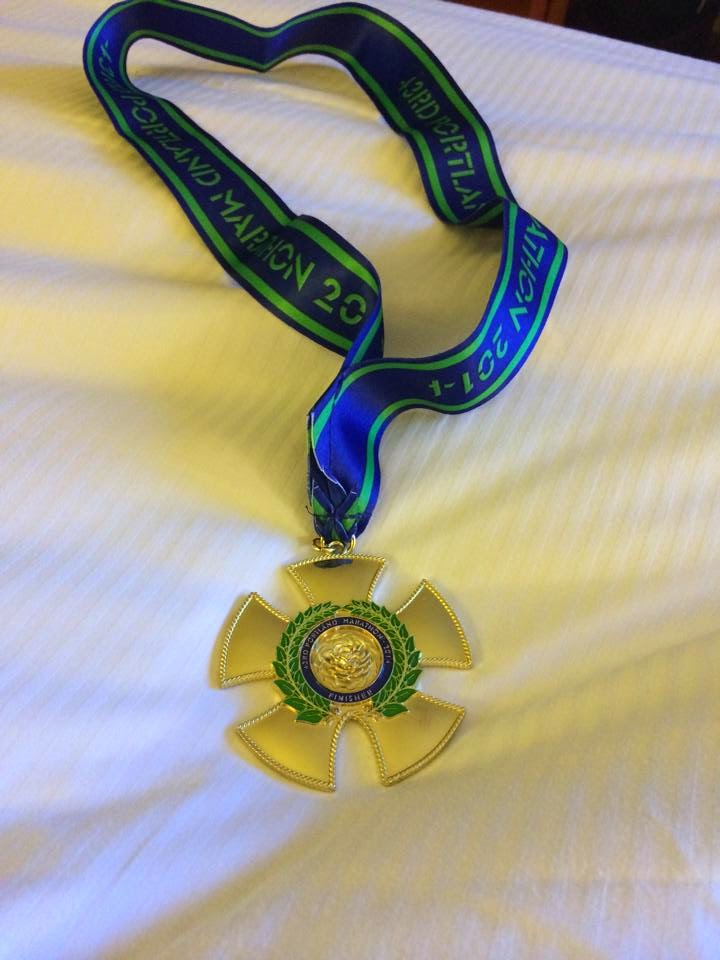 We walked back to the hotel.  I took an ice bath, took a nap, had some dinner and passed out.

The next morning we had donuts! 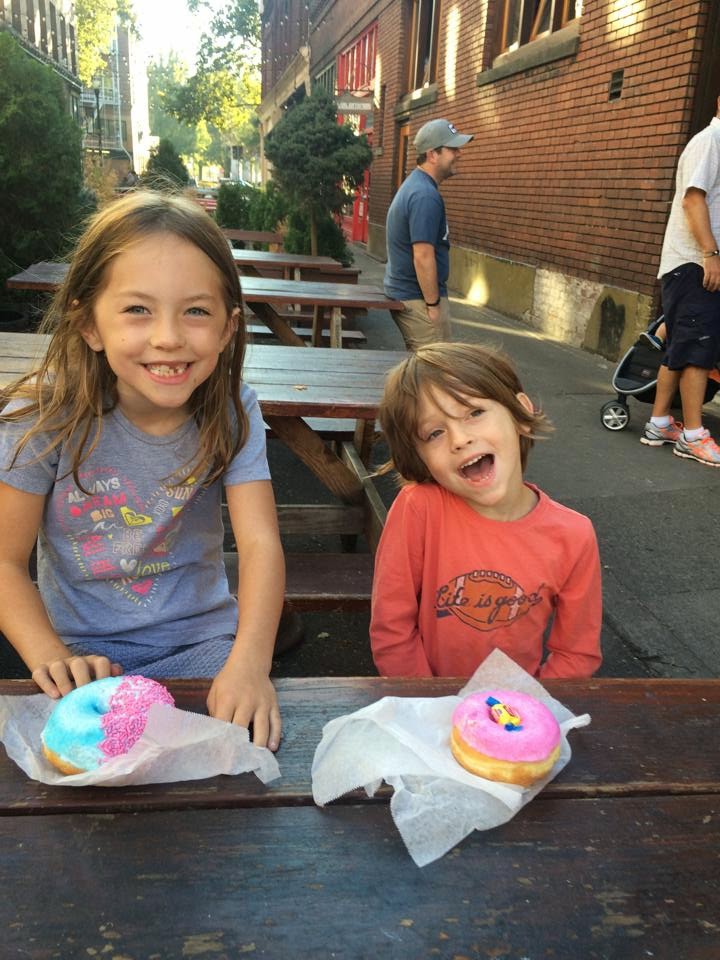