I've been thinking about this a lot recently.  I think back to my first triathlon in 2004.  It was the Reebok Women's Sprint.  I knew nothing about triathlon and I didn't know anyone else who was doing one.
My second season I added an Olympic distance.  This was INSANE for me at the time.  By 2005 I knew of a couple people who were doing Danskin. Friend of a friend kind of thing.  I didn't know anyone who had done an Olympic distance.  I was so freaked out about it, I saw a nutritionist.  I also stopped drinking before the race because I was worried about dehydration.  It was in Seattle.  Looking back, not much of a risk of dehydration :)  This was also my first co-ed race.  Super scary. 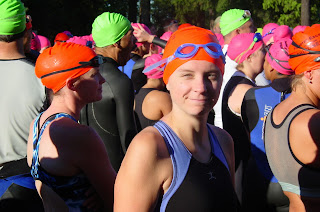 I went to a party after the race and told everyone about it.  They were shocked that I had done something so amazing (or at least they pretended to care).

Fast forward to 2013.  Thanks to Facebook, Twitter, and blogs, everyone I know does triathlons, runs marathons, does adventure races...You name it, I "know" someone who does it.

Does this make my accomplishments any less amazing?  Sometimes it does.  I finished a half Ironman.  I should be thrilled.  Instead, I see people who use my BIG RACE as warm up.  I read about people who run 2 marathons in a weekend.  People who run ultra marathons.

I joined this online world of endurance athletes to be inspired.  And don't get me wrong, I am inspired.  I have learned so much more is possible than I ever could have imagined.  But sometimes it gets to me.  I can't open my Facebook page on a weekend and not see at least 5 pictures of race medals. I can't look Daily Mile and not find someone who has logged insane mileage.  Sometimes it's too much.

I need to step back and be proud of what I've accomplished compared to when I started.  Not worry about what other people have accomplished.